To the Jesse Hunsaker Family, Disneyland IS magic. I know it can get too crowded in the parks sometimes, but thats why you don't go during peak season. Even with the long lines, there is something about the music, the detail in every building, the decorations that make your wait more enjoyable as you anticpate Indiana Jones, etc. that makes you feel like you are in a magical place. The workers must be routinely trained on how to be nice because, seriously, you won't find nicer employees at any amusement park. And they keep those parks so CLEAN. Anytime I saw someone spill popcorn on the ground, there seemed to be someone right behind them sweeping it up.

Anyway, enough of why I think Disneyland is great. Mitch had a week of school in February so the 2L's and 3L's could go get interviews. The 1L's still had to finish a huge brief, but Mitch decided to work extra hard and get his done early so we could take the weekend off and head to Disneyland. Since the next 2 years he probably won't be able to do anything during that week off in Febrauary, we really needed to take advantage of this opportunity. We went with another couple from Law school, and they were fabulous company. 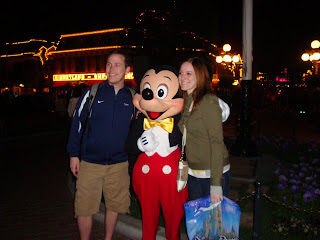 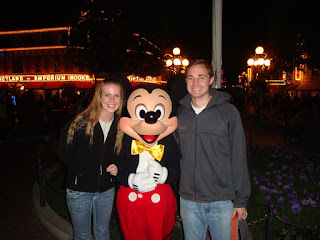 I don't know what it is, but I feel like a little kid again when I go to Disneyland. It is so fun to see all the characters. 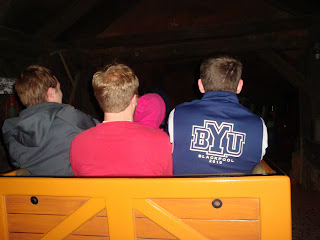 Thunder Mountain Railroad--I don't know who thought that 3 men would fit just fine in one spot, but it made for good entertainment watching them squirm with every jolt or turn. 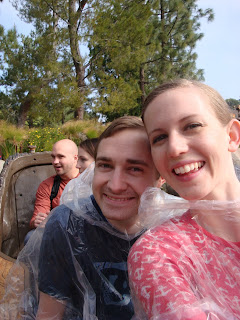 And yes, we wore ponchos on Splash Mountain. Normally I wouldn't, but we went first thing in the morning while there were no lines and it was still chilly.

We had a wonderful weekend, even if it was super short! (Just 2 days at the park and then we came home) My favorite parts of the trip: Finally eating at the Blue Bayou, the new Star Tours (if this wasn't so crowded, I would go on it again and again to see as many of the story lines as I could), and the World of Color show.
Posted by Heather at 8:25 AM 5 comments: