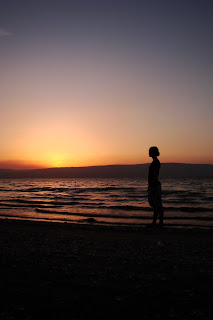 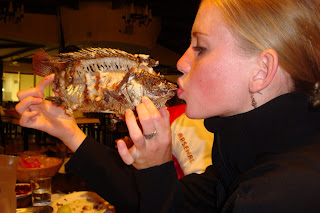 I don’t know where to being to describe my experience in the Galilee. All I know is that it will probably be one of the greatest highlights for the rest of my life. It truly was one of the greatest tender mercies the Lord has given to me. I have grown so much mentally and spiritually during this semester, and my greatest growth spiritually probably came during those 10 days spent on the shores of the Sea of Galilee. During those 10 days I visited all of these sites:
Caesarea Maritime, Megiddo, Nazareth, Boat across Sea of Galilee, Nof Ginosar Ancient Boat, Mt. of Beatitudes, Tabgha, St. Peter’s Primacy, Capernaum, Gamla, Qazrin Village, Tiberias, Mt. Tabor, Nain, Bet Alpha Synagogue, Gan Ha-Shelosha, Beth Shean, Hazor, Dan, Banias, Nimrod’s Castle, Bahai Gardens, Akko, Beth Shearim, Sepphoris(Zippori), Muhraqa, Haifa,
The first day we spent driving up to the Galilee we stopped at Caesarea Maritime, Megiddo, and Nazareth. Caesarea Maritime was absolutely beautiful. It is on the shore of the Mediterranean Sea—which is of now my favorite Sea! (Sea of Galilee is actually a lake so that doesn’t count.) Megiddo is where they get the term “Armageddon” from—supposedly where the last battle before the second coming will be, but it will actually be at Jerusalem. Nazareth was a definite highlight of the Galilee trip. The Church of Annunciation was so big and beautiful, and surprisingly, I could feel the spirit a lot more in there than at the Church of the Holy Sepulcher or the Church of the Nativity. I believe it is in part due to the smaller crowd and more room to sit alone and think.
We had three sessions of three hour class marathons of the New Testament. Normally it would sound a little rough, but studying the Ministry of Christ in the Galilee while actually on site was one of the most exciting things I have done. I learned so much within those three hour sessions of class about who Christ was as an actual man serving on Earth. Bro. Wilson does such an excellent job bringing the spirit into the classroom setting.
A couple days after Nazareth, we took a boat ride across the Sea of Galilee from Ein Gev where we were staying to the other side of the lake where Tiberius, Mt. of Beatitudes, Capernaum, St. Peter’s Primacy, and Tabgha are. One the ride over the wind was blowing hard, it was cold, and all though the waves were not roaring, I felt so close to how the apostles may have felt out on the lake as they feared of perishing, and asked the Lord, “carest not that we perish?” It was a great testimony building experience for me as I could relate to the actually living experience of the Savior. Later on in the week I had the wonderful opportunity of Speaking in Sacrament meeting with a view of the Sea behind me. Part of my talk emphasized the point that the Lord really does care about us, and he is aware of even the small and simple things happening in our lives. Visiting the Mt. of Beatitudes and Capernaum after the boat ride was a truly humbling experience as well. I won’t go in too deep about the spiritual experiences I had because that would take a very long time, and it is personal. But let me just say how much I love the New Testament and also how grateful I am for my teacher Bro. Wilson. My Galilee experience was one of the greatest things that has ever happened to me. I love the Galilee!!
Mt. Tabor, Tel Dan, Nimrod’s Castle, and Muhraqa were probably my other favorite highlights of the trip. Mt. Tabor and Muhraqa were tender mercy experiences for me. I realized that most of my favorite places here in the Holy Land have been either mountains or temple-related places. I realized it is because I can feel the spirit so much at those places similarly to how I feel the spirit in the temple at home.
Anyway, I apologize that this blog entry has turned into a little spiritual journal entry, but that is how the Galilee experience was for me. I truly loved everything about that trip. But I will end this entry on a less serious note. Two of my other favorite things about being at the Galilee were running by myself on the beach (obviously) and the fact that when they prepared a thanksgiving dinner for us, they brought out the turkeys with sparklers in them!!! It was soo cool! I want to start that tradition at home, although I am not sure how well it would work out with smoke detectors at home. Would it work? I don’t know, but it was awesome, and it definitely helped to make me feel less homesick on my first big holiday away from home. We also went to a fish resturant one night on the lake, and no I didn't order the fish, I don't like eating things that are looking at me, but I did kiss Kyle's fish (the picture) and tried some of it. It was pretty good, Dad you would be proud of me, I have eaten a lot of fish here, even just at the center.
Posted by Heather at 4:08 AM No comments: