After a sad good-bye at work to the best co-interns and supervisors, 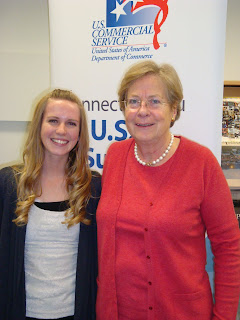 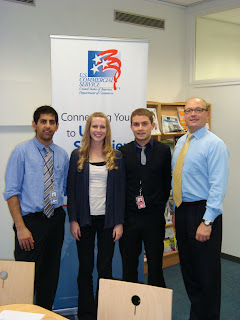 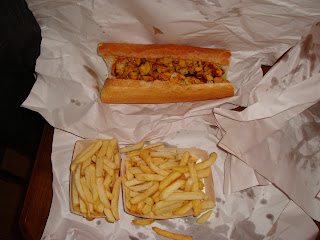 And then on Friday and Saturday we got to enjoy the Christmas markets in Brussels and Brugge. The one in Brussels is FABULOUS with the giant Christmas tree and Nativitiy in the middle of the grand square, then the long street of lights, booths, an out-door skating rink, a tobagan run, and a Ferris Wheel! Who needs the London Eye when you have Brussels at Christmas? 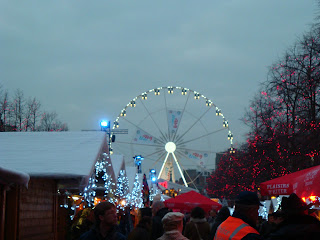 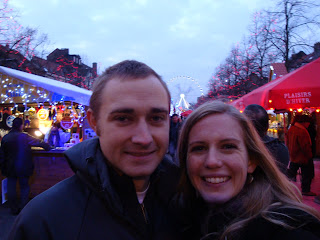 The Christmas Tree looks rather small compared to the giant building, but it was huge. 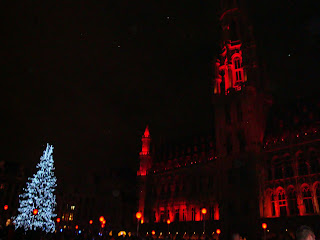 It has been a terrific end to a terrific adventure. Now I hope the last day of cleaning goes by quick enough so that we can come home! (Pray for good weather too) 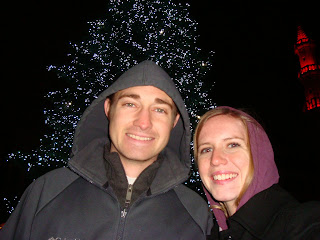 In one week I will be on one of these 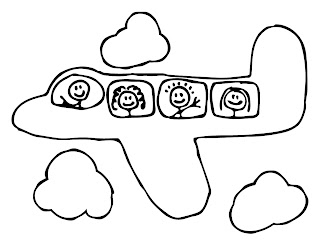 Harry Potter and the Scriptures

I consider myself a Harry Potter Fanatic. I've read all the books at least three times, and my favorite ones perhaps 4 or 5 times. I love the movies, even if some of them are cheesy or poorly made, and I have been known to day dream of life at Hogwarts on occasion.

On facebook, everyone is talking about how amazing Harry Potter is. Its almost as if its a contest to see who exactly is more devoted to Harry. And I found myself wondering what the world would be like if everyone loved the scriptures as much as they love Harry Potter.

I even wished myself once that the scriptures could be as fun to read as Harry is. I think I would read the scriptures A LOT more if they were. Then I realized, there are so many stories from the scriptures that ARE just as good.

For example, think of having to work for 14 YEARS to marry the love of your life? If that were a classic book it could have potential to top Pride and Prejudice for the ultimate love story. And what about the war stories in Alma? There are so many good ones that could beat out the Patriot or Gladiator for the epic battle movie. We think watching a man trying to survive on an isalnd like in Cast Away is fascinating; well what about watching people try and survive in a boat "tight like unto a dish" without having any idea of where they are going?

I have learned two important principles that I need to always remeber. First, the scriptures aren't meant to entertain, they are meant to to teach us faith and obedience. And second, maybe I should devote my heart better to the scriptures than to Harry, because the stories are just as motivating, and what is even cooler-they are TRUE stories.

So, I still love Harry, and there is nothing wrong with wanting to read the books over and over again. But I've decided to instead of devoting my time to telling people on facebook about how obsessed I am with Harry, to make a better effort to apply that love and devotion to the scriptures. I think it will be very rewarding.

And P.S. Harry Potter does have some awesome ties to our relgious beliefs. Thanks to Allison I am learning some really neat connections.

Do you ever think about which scripture stories would make for the greatest books or movies?
Posted by Heather at 6:04 AM 5 comments: 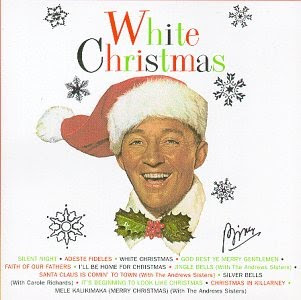 Mitch and I are finished with our big excursions through Europe. We are slowing down and getting ready to go home. Our internships are slowing down as well; my supervisor isn't giving me any big projects since I won't be here to finish them. So work is a little slow, and I'm afraid the next couple weeks might be a little slow as well. Sure it will be wonderful to enjoy Belgium one last week, but even then....we are running out of things to do in Brussels.

Tonight I decided to pull out Bing; afterall, there is no Thanksgiving here in Europe--so its on to Christmas. And thank goodness for Bing, he took all my worries of a slow week away as I sat and dreamed about a wonderful christmas at home with family. I love you Bing.
Posted by Heather at 11:02 AM 2 comments:

I think the reality that I am leaving in just over 2 weeks is starting to sink in. But luckily this week I had a couple things to distract me from the sadness of leaving beautiful Europe.

First, Liz, who is living in Prague with Mitch's cousin right now came to visit us. In two short days we showed her Brussels, Ypres, and Brugge. We also froze our bottoms off in the cold rain and wind. Thanks for coming Liz, we love you and miss you already! For the rest of you who did not come and visit us. . . oh well, your loss I guess. 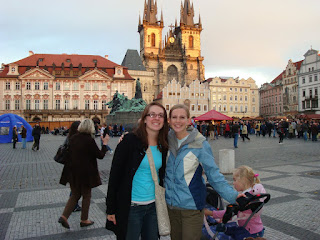 Since Thursday was Armistice Day (end of WWI) we went to Ypres to see a parade and ceremony at a famous battle site that is now a huge memorial. There were thousands of these little poppies covering the place to honor the fallen soldiers. It was very touching. 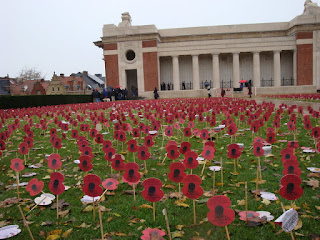 This was part of the parade of solidiers. . . 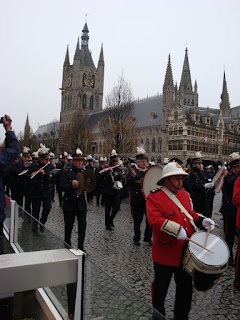 One of the things that is making me more than anxious to go back home is that it is now almost always raining and cold, and I suffer from lack of good rain shoes. I know it will be freezing back at home, but at least I will have the proper attire. I'm too cheap to buy it here for 2 weeks. 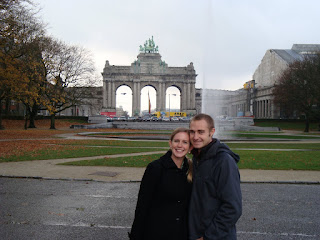 So for now, I'm mostly excited to go home. But then I look at cute pictures like this one and know that as soon as I do get home I'll miss the excitment of discovering a new place in Europe every weekend and having Mitch all to myself all the time. But the longer I am here the more I miss family and friends. . . it is tough not to have both worlds huh?
Posted by Heather at 5:48 AM 5 comments:

Prague was one of the highlights of our entire stay in Europe for sure. This city is a MUST-SEE in Europe. It really is one of the coolest, most impressive cities. Every where you turned in Prague you had an awesome view. 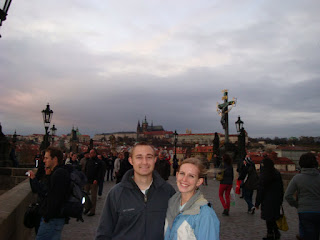 Besides being in this amazing city, we got to stay with Mitch's cousin Heather and her awesome family. It was sooo nice to be in a house again with delicious home-cooked meals and kids running all over the place. We truly felt at home. 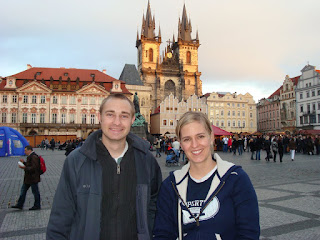 This is what Mitch and I will look like in 12 years with six kids. . . these are Heather's kids that we got to hang out with. Sooo cute! 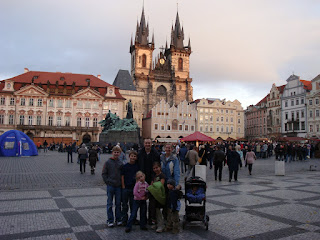 Heather and Spence took us out to eat at an authentic Czech Resturaunt in a small little town. It was super yummy. I am not a fan of the pickeled cabbage however. After dinner we went and saw Prague at night. 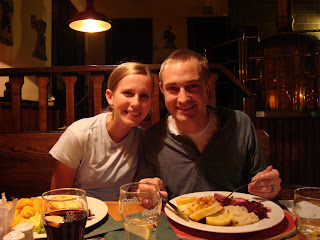 "Czech" out Chuck Norris--I was so excited to come up with that to put on the blog
For some reason he is everywhere in Prague. . . 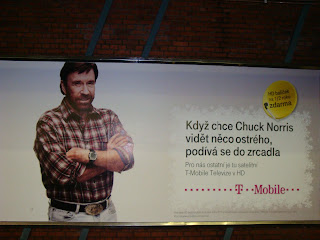 Throughout Western Europe I could see the scars of the world wars. But in Prague, it was different. I saw the scars of communism. The patches in the columns are all spots of bullet holes from 1989. Cool huh? 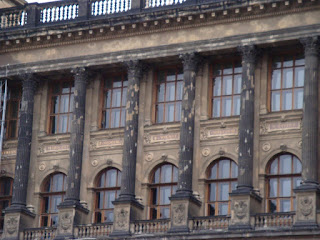 This dark, ugly, cement building is a communist-era building. Most of Prague has beauitful, ornate buildings, but every now and then you see these ugly buildings that remind us of the past. 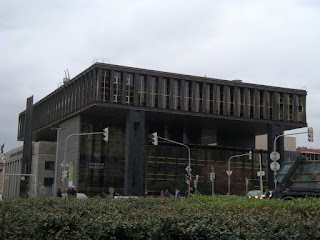 It was a wonderful trip and we hope to make it back there some day.
Thank you so much, Darrington Family.
Posted by Heather at 8:55 AM 4 comments: 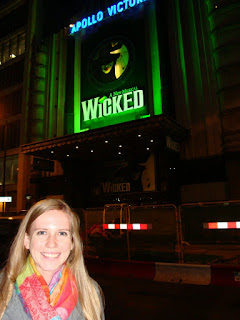 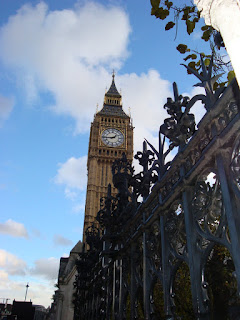 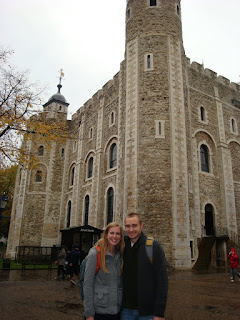 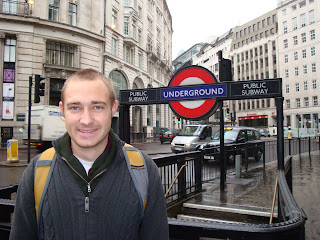 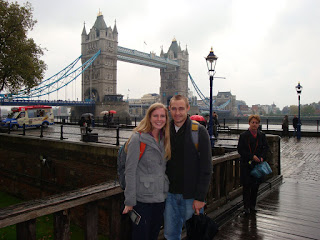 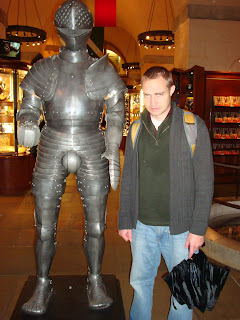 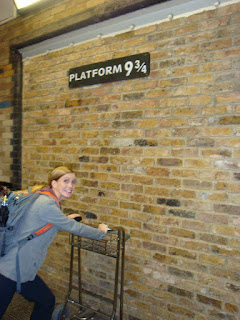 Yes, we had a blast. We did it all--we saw Westminster Abbey (loved the Poet's Corner), St. Paul's Cathedral (soo impressive inside), WICKED, Tower of London, British Musuem (my favorites were the Rosetta Stone and Parthenon stuff), British Library (Magna Carta, Guttenburg Bible, Alice in Wonderland, Jane Eyre, etc.), Big Ben, Buckingham Palace, Hyde Park, etc.
We wish we could have seen more plays since there are so many good ones playing. The Underground Tube can be quite a mess, but you really feel like you are in a tube. And since London is sooo expensive, we stayed in some somewhat cheap but totally sketchy places. What an adventure. We got to ride inside a bus inside a train inside the chunnel in our excursion to and from London (I have pictures to prove it). On the way there about two hours before we got to London the little boy in the seats across from us pooped his pants--it stunk so bad. But other than that, we LOVED it. We plan on spending a lot more time in the UK one day.
Posted by Heather at 1:34 PM 4 comments: