Take a step back

I am attempting to master a new skill. I am trying to discover how to take a step back and pull myself out of context in certain situations to really understand what is going on.

In the wake of this political drama I find myself sometimes upset with others, sometimes dumbfounded out how someone could think so illogically, and sometimes surprised by my own opinions. Taking a step back really helps me to understand who people are and why they are that way. Taking a step back helps me see how beautiful people truly are.
Posted by Heather at 7:06 AM No comments: 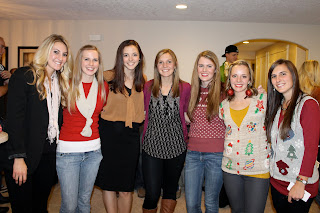 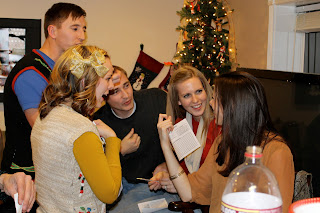 I love my friends.
I love to see how we all have grown up and do wonderful things.
(In December alone, Chloe and Kelsey both had babies; Tia got engaged; Adrienne finished her first semester of law school with a baby; Stacey graduated; Ali got a boyfriend; Liz got home from her mission; Danika went to Europe; you get the picture--sorry if I left you out of the December accomplishments list)

It breaks my hear to think how we are all physcially moving away from eachother as we grow up but I am so glad to know that we will always be so close.

I've always felt empowered studying the women's rights movements throughout history. In high school my knowledge-bowl team was made up of girls and we called our tean the feminists. (Although I don't believe any of us truly understood the full meaning of being a feminist). Then I was applaed to learn that I had to argue against Title IX in my governemnt and politics class in high school as well (which my friend and I ended up winning!).

Mitch and I had an inspiring conversatin about women's rights driving home to Alpine yesterday. We agreed that perhaps the greatest downfall to the women's rights movement is the idea that a woman's sucess is now measured in the same way that a man's is measured.

Don't get me wrong--I think it is fabulous that a woman has the opportunity to be agressive and make a successful career in the workforce. I just think that sometimes a woman can't be defined as an aggressive worker as well as a kind and gentle nurturer anymore. Women who choose to stay home are shown as somehow weaker. It takes a lot of courage for a woman who knows she has great potential in the work force to decide to stay at home with her kids despite the rebukes she may recieve.

Anyway, I'm not trying to say what a woman should or should not do. We are all so unique with different vaules and challenges; we make the best decisions we can and no one else can tell us what to do. I just wish a woman could be measured based on her courage to do what she really loves or values most--and that something could very often differ from what a man would pick. We should be equal to men, but not the same as men. And I think there is confusion there sometimes. Does that make any sense?

On a different note---December was absolutely lovely and I'll post more about that soon. Happy New Year! I think it will be a good one!
Posted by Heather at 2:45 PM 1 comment: